From Monday 3 August, many bus passengers in our region will benefit from cheaper bus fares due to changes to the public transport zone system, with some people saving up to $1.20 per journey.

Previously, bus fares in Nelson-Tasman were based on a four-zone system. Zone One ended at Boundary Road in Bishopdale, Zone Two ended at Quarantine Road in Stoke, Zone Three ended at Saxton Road in Stoke and Zone Four covered Richmond.

This means that passengers can travel from Atawhai to Hayes Corner for just $2 with a Bee Card (or $2.50 if you pay cash), a trip that would previously have cost $3.

Passengers going from Richmond to Nelson using a Bee Card will pay $2.80 (or $3.50 if you pay cash), instead of $4 under the old zoning system.

All feeder loops like the Stoke loop are now considered part of the zone they sit within and passengers have one hour to transfer between services without incurring an extra fare.

The new zones not only make bus travel in Nelson-Tasman significantly cheaper for many passengers but also make the system clearer for users.

Fare categories have also been simplified. One concessionary fare now applies to children (5-18), students, and holders of SuperGold and Community Services cards. Children under five travel free and off-peak SuperGold travel will still be free when using a Bee Card.

“The new zones will make bus travel cheaper for many people, especially those coming into Nelson from Richmond to work. Coupled with the new Bee Card, public transport in Nelson will be easier to access for everyone and we hope more people will take advantage of the great public transport system we have here.”

For more information about Bee Card, how to register an account and load up money go to: http://www.nelson.govt.nz/services/transport/nbus/beecard-faqs/. 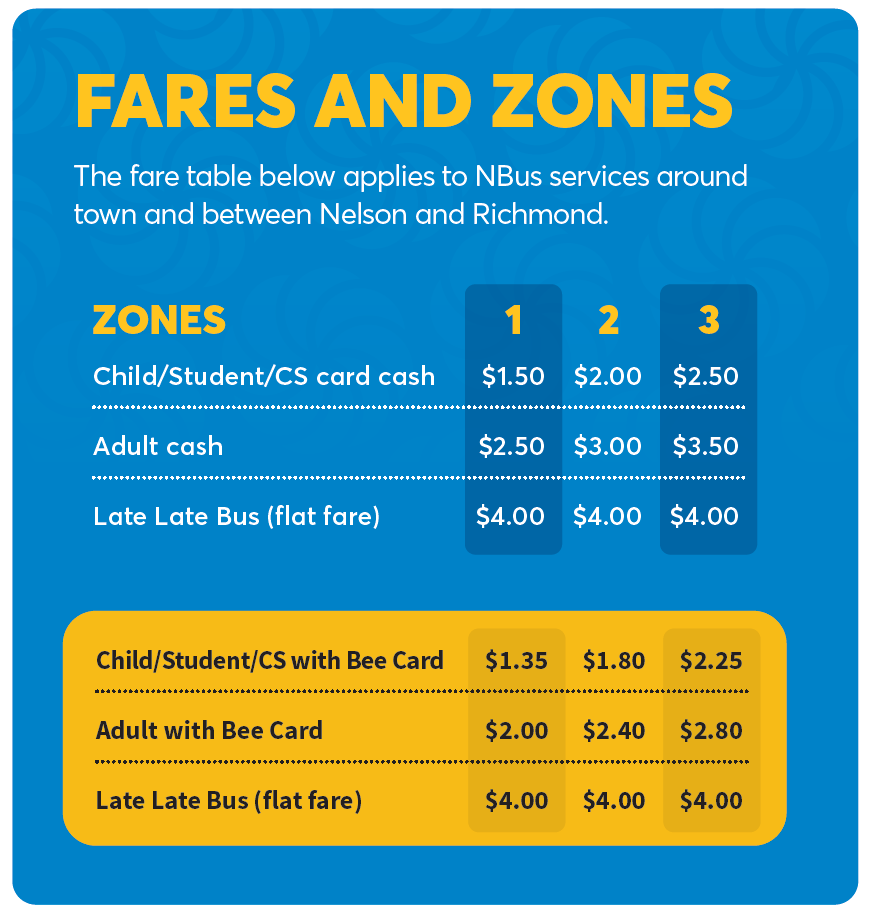