The design, symbolising the taonga species that thrive in the Saxton Tidal Creek area, was built by Stressed Concrete Products Nelson, etched by Brent Connor at Liquid Cut NZ, cut by Simon Crawford at Fabriweld, and installed by Downer NZ Ltd.

Andersen provided an explanation of his artwork:

“The head of Tangaroa is depicted in the shape of a wheke (octopus), and the eight iwi of Te Tauihu are also embodied within the design. The scales on his body represent sea birds and the larger fin scales, the Paddle Crab. His tail wraps around and fans out with the large scale at the base symbolising the Stingray.”

The blessing for the artwork was led by iwi Pou Tikanga Barney Thomas, Harvey Ruru, Amai Thompson and Craig Shepard at a ceremony held on Tuesday 25 January. Speaking at the blessing, Thomas said:

“We haven’t had any rain for days, and although it is raining today it is still beautiful, and very appropriate because that is the purpose of the culvert. To drain away the rain and reduce flooding. So, let’s hope this structure does what it needs to do.”

Starting in 2013, the Saxton Creek Upgrade is a multi-year project designed to provide further protection to the Saxton area from flooding. It is now in its final phase.

After extreme weather in 2011 and 2013 caused significant flooding to properties near Saxton Fields, Nelson City Council embarked on a flood protection upgrade to the Saxton Creek.

Infrastructure Committee Chair Brian McGurk says the Saxton Creek upgrade will provide increased protection to residents and businesses in the Saxton area for decades to come.

“It’s fantastic to see Tangaroa associated with this project, given its relationship with the sea and the Nelson coastline. The whole project, from the engineering to the artwork, is testament to the skills and hard work we have on hand in Nelson.”

This segment of the creek can only handle a 1-in-5-year flood event. The upgrade will mean the area will be able to cater for a 1-in-100-year flood event. Without this vital work, we would not see the benefits of the work carried out in the earlier stages. Caption: Isaac Andersen, the artist who designed the artwork for the Saxton Creek culvert.

The Kānoa funding helped bring the project forward, creating new jobs for Nelsonians and providing a boost to local economies and social wellbeing following the impact of COVID-19.

With extreme weather events more likely to occur due to climate change, the Saxton Creek Upgrade is one of a number of infrastructure projects Council is working on to increase Nelson’s stormwater capacity and resilience to heavy rainfall. 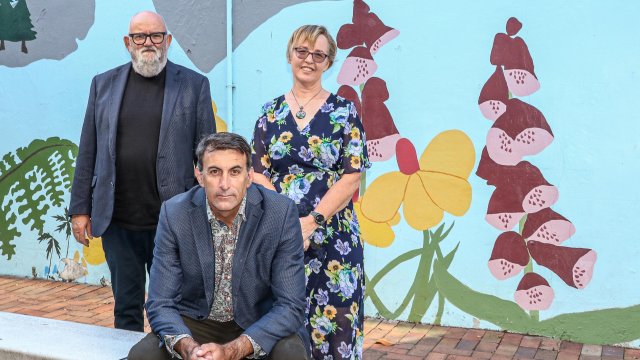 Have your say on art and creativity in Whakatū